Joined Sep 3, 2013
·
8,203 Posts
[h=4]In a nutshell Abarth adds some fire to the 500s belly with its Abarth 595.[/h]
[h=4][/h][h=4]Practical Motoring says This is a definite heart over head proposition. See, the Abarth 595 isn’t as practical, if you’re cross-shopping with key rivals, as, say, the Ford Fiesta ST, and the quality might not be up to the standard of others in the segment. But, the Abarth 595 is a whole lot of fun to drive and has a suitcase full of character that allows you to forgive it almost everything.[/h]WHEN IT COMES to platform spin-offs and reinventions, the Fiat 500 is right up there with the MINI. The current incarnation of the retro darling was launched back in 2007 and has since spawned a handful of variations, the latest being the Fiat 500X which is based on the same platform as the Jeep Renegade, but I digress.
For those who aren’t up to speed with the significance of the Abarth 595 name, allow me to enlighten you, or bore you… Abarth had been the go-to brand for Fiat when it wanted to turn up the wick on the 500, providing exhausts and tuning kits, then, in 1963 at the Turin Motor Show the first full Abarth 595 appeared. So successful was the model that Fiat eventually took over Abarth in 1971 forever linking the two brands.
Fast forward to now and the Abarth 595 is just as emotive as it was back in the 1960s. We’re testing the Abarth 595 Turismo (from $33,500+ORC) which is the entry-ish level and only available as a hardtop, while the Competizione can be had as both hardtop and convertible (from $36,500 – $41,000+ORC). 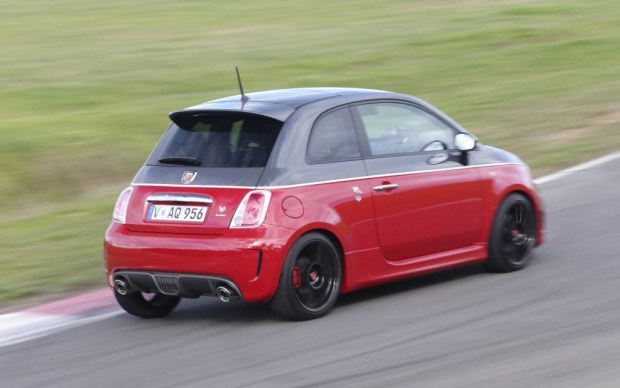 While the Abarth 595 is built on exactly the same line as the standard 500 it does indeed exude a level of aggression the standard car can’t match. While you’ve got to shop upstream (Competizione) to get the Sabelt bucket seats and the beefy exhaust, the Abarth 595 Turismo we tested didn’t feel underdone. If anything, it felt like an old-school hot hatch… you know, the minimum of stuff inside with none of the cosmetic frippery. That said, it’s not exactly stripped bare, it gets leather seats, 17-inch alloys, Koni front suspension, sat-nav, Bluetooth and audio streaming, and a seven-inch touch screen display that, at the touch of a button, displays cornering g-forces and boost gauge. 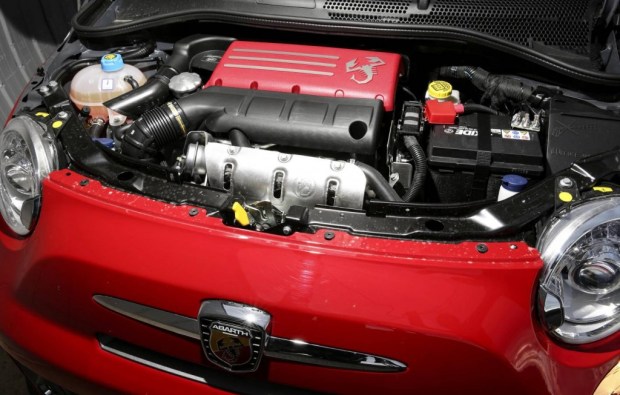 Under the snub-nosed bonnet of the Abarth 595 is a 1.4-litre T-Jet turbocharged four-cylinder petrol engine that makes 118kW (at 5500rpm) and 230Nm of torque (at 3000rpm). Our test car was fitted with a five-speed manual gearbox but an Abarth Dualogic gearbox is available as a cost-option. The little Abarth 595 has enough grunt to get to 100km/h in 7.4 seconds (7.6secs for the auto), is limited to a top speed of 210km/h (209km/h for the auto) and drinks 5.4L/100km.
Looking at the numbers above you might initially laugh off the notion Abarth 595 being a hot hatch, but don’t. See, pressing a Sport button on the dash quickens the throttle response and the engine’s willingness to offer up torque, and while the Abarth 595 won’t slam you back into the seat when you stand on the throttle, it is surprisingly quick. 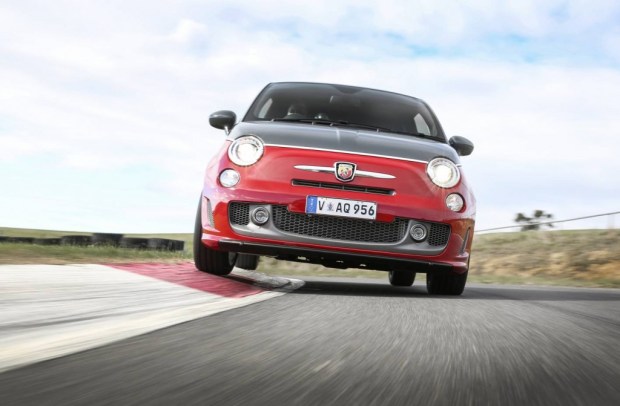 And while there is a touch of turbo lag, you can get around that by dropping down a gear on the five-speed manual which offers a nice short, notchiness-free, throw. Probably the Abarth 595’s most endearing feature is the fact its perfectly drivable at around town speeds; unlike other hot hatches it doesn’t feel like its always straining at the leash.
Around town the Abarth 595 offers a firm but not hard ride and it manages to round the edges off all but the sharpest of potholes and road expansion joints. You certainly won’t lose any fillings driving this thing. The firm, sporting ride pays off when you get onto a twisting road. Indeed, the Abarth 595 displays a level of body control, accuracy and agility that’s lacking in many of its competitors. And it does all this without feeling nervy or twitchy.
The same goes for the steering which offers 2.5 turns to lock and offers enough feel, weight and accuracy through the wheel to keep you dialed into the doings of the thing. In all, the Abarth 595 Turismo is a fun little hot hatch that will keep a smile on your face whether you’re schlepping along the highway or pushing it hard (but obviously within the legal limits) along your favourite stretch of twisting road. Some outlets claim the Abarth 595 needs more oomph to be truly hot, but that’s wrong, indeed putting more grunt into this thing would make it too one-dimensional. 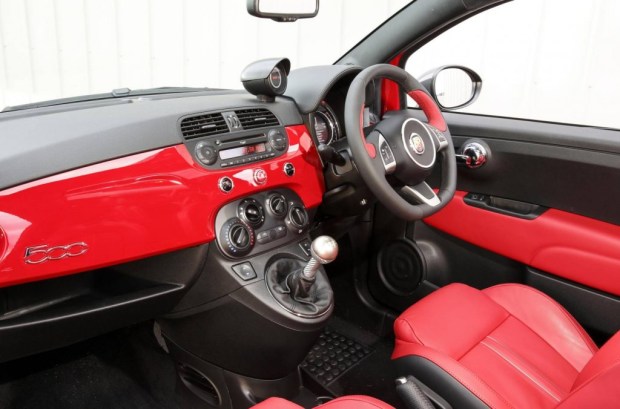 While the two-tone exterior heralds you’re not driving a garden-variety 500, the interior is a little more sedate, well, it is in the Turismo. While there’s a strong argument to be made that the Abarth 595 costs too much when compared with similar types of vehicle, like the Kia Pro_cee’d GT, for instance, which offers a full-size backseat for similar money. But the Abarth 595 isn’t a sensible purchase, you buy it with your heart and not with your head…
While the Abarth 595 is small, it doesn’t feel squashed inside and we even managed to fit a booster seat into the back of the thing, although the boot at just 185 litres is small. Some of the hard plastics and powder-coated metal finishes mark easily, and while the seats are sports-style I found them to be a little too short for me, you also sit up quite high in the thing and so taller drivers (six-foot) will find they’re almost brushing the roof with the top of their head, and there’s no reach on the steering, either.
In terms of safety, the Abarth 595 gets seven airbags and a five-star ANCAP safety rating. It also offers traction and stability controls, ABS with electronic brakeforce distribution, hill-hold assist, and daytime running lights. There are ISOFIX mounting points in the backseat.
[h=4]2014 Abarth 595 Turismo[/h][h=4]Price From $33,500 (+ORC)
Warranty three years / 150,000km
Safety five-star ANCAP
Engine 1.4-litre T-Jet turbocharged four-cylinder petrol
Power/Torque 118kW/230Nm
Transmission five-speed manual; Abarth Dualogic gearbox
Dimensions 3546mm (L); 1627mm (W); 1488mm (H)
Weight 1035kg
Thirst 5.4L/100k[/h][h=4]
[/h]

Joined 14 d ago
·
1 Posts
I have just purchased a second hand Abarth 595c turisimo twin tone paint work and an MTA semi manual transmission option with paddles but the gear change in manual or automatic makes an electronic sound when shifting up or down. Is this normal? I wasn’t sure if this is a fault or a feature?
If anyone knows please share.
thanks
DA.
1 - 2 of 2 Posts
Join the discussion
Continue with Facebook
Continue with Google
or sign up with email
Recommended Reading
Read More
Read More
About this Discussion
1 Reply
2 Participants
Last post:
DAbarthur 14 d ago
Fiat 500 Forum
Join our community to talk about all things Fiat 500 related. Check out our discussions on the Fiat 500, Abarth, 595, engine specs, MPG’s and more!
Full Forum Listing
Explore Our Forums
Fiat 500 General Discussion Forum Fiat 500 Abarth Fiat 500 Engine and Technical Discussion Fiat 500 Appearance and Body Fiat 500 Wheels, Tires and Suspension
Popular Communities