LEDs that work without errors

Joined Oct 26, 2020
·
7 Posts
Also, I "thought" I got all the correct CANBUS LEDs and now I get the DRL and BOTH TURN SIGNAL errors after driving for a bit. So I may just have to rip out all the LEDs except headlights and fog lights. UGH

It's a surgical work, after a lot of experiments with oscilloscope. 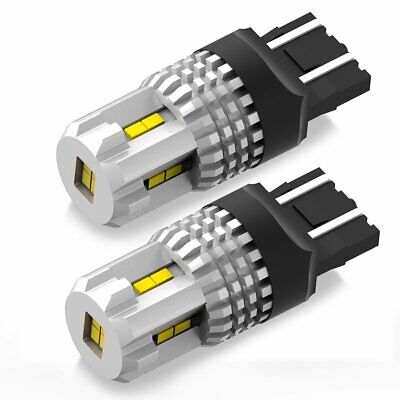 But I cannot find any LEDs that will work correctly for the brake/tail lights.

inz said:
Almost a year later from this original post, is there any solution -plug and play- for the LED DRL? 😬
Click to expand...

turtlenorthwest said:
I'll be interested in your experience with the dome lights. I bought some Canbus LEDs for the domes (Phillips I think), and when the car is on, those lights are also on...but very dim. They come on nice a bright when switched on, or the door is open, and the little light they produce driving down the road hasn't been a bother, but would still be nice to find a set that doesn't do that.
Click to expand...

Hapa_Toast said:
I did what most people, who really want white LED DRLs, did - turned the DRL function to OFF in the car's configuration - meaning they only turn on with the headlights. It does defeat the purpose of DRLs but it's the only way to keep them on without triggering an error apparently.

I just got these same Katur 7443 LED bulbs for my 2015 500 Sport and they work perfectly without any errors. Even with just the DRLs on, they were the 12th set of bulbs I tried.
P

I tried these and they work perfectly fine but with an error message. If I turn on the headlights immediately then there will be no error message, only when the headlights are off and the DRLs are on, did I get an error message. I was just going to live with it since the bulbs function fine, some canbus 7443s not only give an error, they also turn off and on by themselves when they get hot. The Katur 7443s in this thread was the DRL Grail for me.
P

Joined 11 mo ago
·
18 Posts
the Katurs also started giving errors so I gave up on error free Canbus bulbs for the Fiat 500 DRLs. I have PIAA 7443s on the way however as a last ditch effort I did find DRL/Headlight Dust Caps (they are the same part number) with a 25mm hole drilled into them on AliExpress and ordered them. I will have an LED decoder outside the housing somewhat “suspended” and see if that works. Also have resistors to try out that way. Will update.

premier0815 said:
I tried these and they work perfectly fine but with an error message. If I turn on the headlights immediately then there will be no error message, only when the headlights are off and the DRLs are on, did I get an error message. I was just going to live with it since the bulbs function fine, some canbus 7443s not only give an error, they also turn off and on by themselves when they get hot. The Katur 7443s in this thread was the DRL Grail for me.
Click to expand...

2015 500e, MK7 GTI
Joined 4 mo ago
·
9 Posts
I've tried 2 different brands of LED for the reverse lights T15/921. I can get one side to work but it only works if the halogen bulb is installed on the other light. Any ideas how to fix this? I took one set of them and installed in my GTI with zero issues, worked straight away.

Joined 3 mo ago
·
1 Posts
I've always had problems with LEDs.. I studied this problem and it turned out that the failure of the LEDs is a consequence of the driver being screwed close to the board. To avoid such a problem, but at the same time there is a desire to install the driver on the board, it must be done through hollow spacers, so that there is a distance of at least 5-7 mm between the surface of the board and the driver. I can advise you to go to Amazon and order everything you need. So, for example, I found https://www.amazon.com/Flagpole-Energy-Battery-Illumunation-Vont/dp/B00YBDA7DC/[/url ] and it's very cool! I hope I was able to help you!
P

RostHaus said:
I did a bunch of searching and came to the conclusion that Lasfit LEDs were the ones to try.

And so far so good!

Its a bit of a tight fit on the passenger side, I recommend taking the bolt out of one of the reservoirs so you can get the headlight cover back on.

Other than that, the wiring just needs to be tucked around the top of where the bulb sits and its done.

This was a test because I wanted to see if these Canbus ready bulbs would actually work on the car. The t10 size is used in a number of places.

Its a bit thick compared to the stock bulb, so it has some issues fitting in the bulb socket. But there is enough flexibility to pry some extra space out of the bulb socket. I'd expect the same issue with the socket on the side markers, and turn signals.


Hope this helps some looking for LED replacements.

i'm going to try out some others as soon as i can. Fogs, interior bulbs, and some side markers.
Click to expand...

Old thread I know,
But as usual the links have been deleted or no longer exist,
Does anyone have the part number to these LASFIT LED 9012 BULBS??
The Amazon links are bad.

2017 FIAT 500e
Joined Aug 28, 2020
·
42 Posts
Ha, the zombie thread is alive! My $60 Sylvania halogen bulbs toasted in just over a year. I too am on the same quest for LED longevity. I found these on Amazon and the car fit thing says the do work on a 500, but they are a bit salty. Then again I do love the free returns, just not standing on line at UPS making those returns. Mulling it over. So many reports of Canbus issues has me a bit shy.

They were recently posted by @Larry Karoll here:
Headlights and fog lights stopped working at the same time

I noticed the oldish date on that screenshot, so I searched Amazon myself to find the current link for them & I THINK this is it:
https://www.amazon.com/dp/B07WYL1P4...=OLeUa&ref_=sbx_be_s_sparkle_lsi4d_asin_2_img

Electric Tire Shredder said:
Did you check these out?
Click to expand...

I just installed those lights. Haven't drive an inch with them but I did learn one thing. They are 2-sided LEDs, kind of like they are mounted on a popsicle stick, and they need to be adjusted about 45 degrees. I read that in a amazon review but forgot to do it to the first light. So as an experiment I left it stock and put the other in so the popsicle stick was parallel to the large tab. It was about a 45 degree adjustment. You can see from this pic that driver side is definitely brighter and that is the one I adjusted. If you buy these read the top review in Amazon. The guy tells you what to do. I'll report back after I do some night driving.

Here's what you get.

It's nice that they throw in the wrench for adjusting the angle. I didn't see a need for the zippies. The dust caps wont go on with these. I plan to drill a 2 holes side-by-side in the back of them, pass through the connector and then just silicone the wire to seal it up. I have to wait for temps above 40 to do that. According to the long range forecast it'll be late February or March. Hmmm, now that I think about it, I wonder if I can work all of that into the housing of each light with no mods? And I guess you have to worry about the heat or it wouldn't have a fan. Hmmm... prolly should stick to do nothing. If I seal it up it can't cool. Thoughts anyone?

2013 FIAT 500e
Joined Dec 22, 2016
·
3,430 Posts
I've now read a LOT of Amazon reviews, & at least one said they put the wire with the canbus block inside the housing with the dustcap on, although that was a different brand bulb AND car.

As for heat, the OEM halogen bulbs are pretty hot too, but you could turn the LEDs on while parked for minimal cooling airflow. Then pop the hood & feel them. Then if they're not all that hot, you could put a cap on for a few minutes, then take it off & feel, then try a bit longer, & see how hot they eventually get.

Many plastics can take pretty high heat. I accidentally left a shopping bag on top of my friend's huge counter-top oven at 375F & she was SO pissed but it didn't even melt. I've even had some pre-made meals in plastic that say they're conventional-oven-proof.

They're an in-between price*, with tons of great reviews when used in projector housings like ours, although apparently not quite so good in reflector housings but of course that doesn't matter to us.

@MondoMojo shouldn't have a heat issue tucking it all inside the dustcaps, because one of the reviews was a 500e user who did that. They didn't mention this though:

Hikari says I might need this $30 pair of add-on decoders, which they have available, unlike other brands I checked. The bulbs above have the standard one built right into the BULB**, so an external one would still fit in the housing, with the dustcaps on.

Less than 5 minutes to do the driver's side but the other side is a bit blocked by a coolant reservoir. The new bulb only cleared the housing with its plug straight up instead of straight down as instructed, but it seems to work fine, with space for the OEM dust caps, & no adjustment needed.

No flickering or errors yet, so I hope that won't start after I get the 2nd one in 🤞.

I'm going right now to do a night drive test & also to park facing a light-colored wall for another old vs new comparison pic.

"WOW! These might be as good as the eGolf SEL that spoiled me!".

When I first drove my friend's eGolf SEL with OEM LEDs I actually said "These headlights are so good, I can't believe it isn't illegal to sell a new car with anything less".

My pics above & here do NOT do them justice.

In real-world driving they light up SO much more, especially anything "retro-reflective" like paint lines, bike reflectors, tail-lights of parked cars, & even streetsigns well above the cutoff line!

OEM fogs TOTALLY fill in the little dark patch low center of the pattern, which actually hits the road so close to the car that it doesn't matter at all. Sorry I didn't yet think to take a pic with fogs on, or a pic of the blinding blue-white high beams which I rarely get to use here in the city.

Click to enlarge, but please ignore the angle of the door. The driveway is sloped down on the right & the camera is parallel to the car floor: